CES 2016 in Las Vegas saw the announcement of two new Nikon cameras, the Nikon D5, and the Nikon D500.

We decided to cover both of them!

While the wait for a worthy successor to the D4S (Nikon’s flagship full-frame) was long overdue, a renewed presence in the DX format was badly needed as well.

Nikon has a few models in the DX format segment which could hold their own, chief among them being the D7200, but none can match the new D500 regarding its superior autofocusing, shooting speed and of course 4K video abilities.

Plus the true DX champ, the D300S is an aging product (in fact, Nikon has stopped manufacturing it). The launch of the new Nikon D500 is thus the dawn of a new era of DX-format shooting.

The new D500 is the new flagship DX-format DSLR in the Nikon stable.

For those of you who have a D810, the ergonomics are conspicuous. The D500 is modeled on the D810. Dedicated buttons for White Balance, Metering, the lack of a pop-flash all point to the inevitable conclusion that this is a pro photographer’s camera. As a matter of fact, the lack of the flash adds to the overall weather sealing capabilities of the camera.

A casual glance at the spec sheet and a certain 20.9 MP against the resolution row might catch your attention. After all, even the D7200 has a 24 MP resolution sensor. But where the D500 loses out on the resolution it more than makes up in metering and autofocusing prowess.

The D500 shares the same ground-breaking autofocusing technology as the new FX flagship camera. It has a 153-point AF system. Out of this 99 of them are cross-type. However, just like the D5, only 55 are selectable at any time. 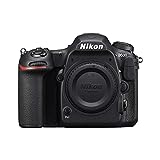 Many of the features of the new flagship, the D5 has trickled down to the new Nikon D500 as well. For example, the D500 inherits the 180-pixels RGB metering system of the new FX flagship.

Powered by the same EXPEED 5 image processing engine as the D5, the D500 can shoot at a continuous shooting speed of 10 fps for a maximum of 200 RAW shots.

This DX camera is no pushover in fast action, sports or bird photography and should give pro level DSLRs a run for their money.

Unlike the D5 the D500 can shoot 4K videos for a maximum of 29:59 mins. Movies are recorded in MOV format with sound recorded via the built-in stereo. You can optionally plug in an external stereo mic for better quality sound.

D500 has all the bells and whistles when it comes to connectivity features. Starting from the archaic ability to plug in a cable to access the images straight from the camera, to taking the card out to plug into a laptop or card reader. Plus, it has Bluetooth connectivity as well NFC.

With NFC, you can pair a compatible smartphone just by tapping it to the camera.

Nikon has paired the camera with SnapBridge. This allows the camera to automatically send images to a compatible paired device. If the camera is paired with a smartphone, then GPS data can also be pulled into the image EXIF.

The D500 has a dual card slot. One accepts SD cards and the other high-capacity XQD cards.

The screen can be flipped up and down allowing you to compose from a different point of view. A boom-type protrusion extends the screen, and it then flips out up and down.

The D500 is powered by Nikon’s EN-EL15 battery. Nikon has maintained a healthy consistency across some professional cameras including the FX-format D750, the D810 and the very popular DX format cameras the D7200 and the D7100 regarding power.

At that price, you could seriously look into some full-frame options such as the Nikon D750, the D610 and even some rival Canon products.

Should you buy it?

The new Nikon D500 makes good buying sense in a lot of ways:

Overall this is a fantastic camera you will never go wrong with.