The launch of the EOS Rebel SL2 was actually a dual launch. Canon also launched the upgraded EOS 6D Mark II. This was to commemorate National Camera Day in the US. Here, we shall be looking at the smaller of the two systems, the crop sensor EOS Rebel SL2 and find out more about it. 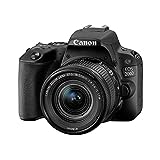 The EOS Rebel SL2 is the second generation of the smallest DSLR that ever to have come out of the Canon stable. This is a DSLR that directly competes against traditional point & shoot systems as well as mirrorless cameras, cameras that traditionally enjoy the small size tag. The EOS Rebel SL2 came out nearly four years after the SL1. Therefore it is expected that the camera will demonstrate a lot of changes.

The sensor inside the EOS Rebel SL2 is a 24.2 megapixel APS-C CMOS one. It is capable of firing RAW and JPEG frames of the size 6000 x 4000 pixels. Much improved than the 18 megapixels older camera that it replaces.

The number of AF points do not increase above and beyond what we have seen in the Rebel SL1. The total number of AF points remain the same at 9. The center AF point is a cross-type. These are the same as in the older camera. However, the new camera does get the dual pixel CMOS autofocusing technology. This technology should bolster its video shooting capabilities, as well as live-view, still shooting.

The viewfinder in the new EOS Rebel SL2 is the same as was on the SL1. The pentamirror powered viewfinder offers a coverage of 95% of the frame as captured by the sensor. Just like any other camera with a cropped viewfinder, you will have to be a little careful when composing images, watching out for elements at the fringes of your frame.

The 3″ LCD screen at the back of the camera gives 100% frame coverage.

The touch screen can pivot which means you get better control when shooting videos. Also accessed via the improved rear LCD screen is the upgraded Canon Guided UI. We have already seen this on the EOS T7i (EOS 800D). The screen also comes with touch to focus technology. This is handy when shooting stills in live-view mode and you would want to pin point your focusing with just a finger tap instead of using the AF point or the manual focusing ring.

The new EOS Rebel SL2 can shoot full HD videos at a higher frame rate than what the SL1 did – 60 fps compared to 30 fps. The camera also gets a five-axis digital image stabilization system that comes in handy when shooting videos for stabilized sequences.

On top of it, the camera also gets the dual pixel CMOS auto-focusing technology. The latter is a technology which is geared towards auto-focusing in live-view mode. There is also an external microphone input for recording stereo quality sound.

The EOS Rebel SL2 comes with built-in Wi-Fi, NFC, and Bluetooth. Transferring images and videos or pairing with a compatible device or controlling the camera remotely are all things that are easier. The previous camera had none of these.

The greatest advantage of the EOS Rebel SL2 is definitely its compact size. That gives it the ability to be lobbed into a bag and taken everywhere with you. After all, this is a DSLR and that means you get the complete EF-S lineup of lenses behind it to take advantage of. It is officially the smallest DSLR with a movable LCD screen.

The camera body has a lot of plastic in its design. At this entry level segment that is expected. But it doesn’t feel like a cheap contraption when you use it. The buttons and dials are well designed. The main mode dial does not stick out and is wedged inside the top panel with just a small portion at the rear sticking out for operating.

If you don’t like the bland black look then the EOS Rebel SL2 comes in three different finishes. You get to choose between a white, a silver/tan and of course the black version.

The EOS Rebel SL2 does get some important updates.

The dual pixel CMOS auto-focusing technology, full-fledged connectivity as well as the higher resolution. Some of the changes are not game changers. A slightly upped continuous shooting speed e.g. overall, however, the EOS Rebel SL2 does make sense if you are upgrading from a smartphone/point & shoot camera and this is your first DSLR.

If you already have the Rebel SL1 then it makes no sense trying to upgrade to the EOS Rebel SL2. You should opt for something with a larger sensor or better features, like the Canon 6D Mark II.