I would argue that Washington, DC is the best city in the world for photographing monuments.

My two visits to the city left me in awe of the number of sculptures, structures, fountains, and buildings that have been created to commemorate important people or past events. The monuments and memorials range from grand in scale to considerately small, and each has its own charm and variety for unique photography possibilities.

It would be impossible to visit all of the monuments in DC – there are over one hundred of them in the National Mall alone – but if you’re looking for a shortlist of the best ones to visit on a photography trip, here are my suggestions on the best photo spots in Washington, DC!

Often featured in movies and TV shows as the location is symbolic in American history, the Lincoln Memorial is housed in an impressive Greek-style columned building at the west end of the National Mall.

This memorial can get incredibly busy with tourists during the day, so it’s best to arrive here at dawn to make use of the early morning light, or late in the evening when the memorial is lit up. Take along a wide angle lens to capture the monument up close, and experiment with different angles while inside.

It would be tough to visit DC without taking at least one photo of the famous Washington Monument. Located in the middle of the National Mall, this was once considered the world’s tallest structure for a few short years in the 1880s.

Due to the marble obelisk’s impressive size, you’ll probably have to do your photography from a distance to capture the entire monument in your frame. In my opinion, the best photo spot is from the Lincoln Memorial as it provides an elevated view with the reflecting pool in the foreground. Visit this spot at sunrise to capture the monument silhouetted against the colors of the morning sky.

It may be touristy, but the White House is an unmissable Washington photography location. This iconic building has been the official residence of the US president since 1800 and is a familiar subject for photographers who visit the city.

Most people view the White House from E Street NW as this spot is closest to the National Mall. The curved southern facade is lovely, but if you want to get closer to the building, try viewing the White House from Pennsylvania Avenue NW on the north side. Remember to take a telephoto lens with you to zoom in for close-ups.

You absolutely cannot visit Washington, DC without photographing the United States Capitol Building. Sitting proud atop Capitol Hill, it has an exceptionally stunning facade with an impressive multi-level dome that can be spotted from almost any location within the National Mall.

You can also see the interior of the rotunda with its painted fresco in the eye during a free tour of the Capitol. The repeating patterns in the architecture look particularly interesting in photos. Be sure to check the prohibited items list before you go inside the US Capitol Building, as some items such as large camera bags are not allowed to be taken on tours.

The Korean War Veterans Memorial is one of the most moving war memorials I’ve ever visited. It features life-size soldier statues with haunting faces that appear to be moving cautiously throughout the garden.

I found that contrasting the statues which reflect the horrors of war with their peaceful surroundings made for some great photos. Visit this spot on a cloudy day or early in the morning for the best light conditions.

The World War II Memorial sits at the east end of the Reflecting Pool in the National Mall. Photographers are drawn here to capture the sea of gold stars that are mounted on a contrasting blue wall, or the symmetry of the fountain surrounded by the monument structures.

This can be a relaxed location to visit during the day, but it really looks best at night when the monument and fountain are lit up. Be sure to take along a travel tripod for capturing long exposures of the water flow.

The Tidal Basin is known for being one of the best places to see cherry blossoms as they bloom in spring – usually between mid-March and mid-April when the National Cherry Blossom Festival is held. The Japanese cherry trees surrounding the basin were gifted to DC from the Mayor of Tokyo in 1912, and they have become a celebrated part of the city ever since.

A popular photo spot to capture the cherry blossoms is around the Japanese Lantern on the north side of the basin, where you can look out over the water towards the Thomas Jefferson Memorial. You can also walk around the west edge of the basin for views back towards the Washington Monument.

Smithsonian Castle, which was completed in 1855, was the first of the Smithsonian museum collection. Its neo-Gothic architecture in red Maryland sandstone is a popular Washington, DC photo spot. The castle is best viewed from the front on the north side with the Professor Joseph Henry Statue in the foreground.

If you’re interested in photographing more beautiful museum buildings, it may also be worth visiting other Smithsonian locations including the Arts and Industries Building and the National Museum of Natural History.

Arlington National Cemetery is probably one of the most photographed cemeteries in the world. This destination offers plenty of opportunities to capture emotional and thought-provoking photos throughout the grounds. Arlington is huge, so you might want to consider hopping on the tour bus or tram service from the Welcome Center to get around to the different sites within the cemetery.

Arlington is known for having rolling green hills covered in endless rows of white headstones that mark the resting place for military veterans and their families. If you’ll be travelling over Memorial Day, you’ll be lucky enough to see the US flags that are placed on each grave creating an additional symbolic element to any photos taken over the holiday.

How To Photograph Memorials – Useful Tips, Tricks, and Considerations

Union Station is a stunning building that has a similar feel to Grand Central Station in New York City. Capture the beautiful architecture including the high arched ceiling and tiled flooring inside, or head outside to Union Station Plaza to see the grand exterior with Christopher Columbus Memorial Fountain out front.

While not as artistic as Stockholm’s metro stations, the subway in Washington does have some interesting concrete architecture throughout the metro system. Gallery Place Chinatown Station and Smithsonian Station are some other promising photography locations.

Like I said, Washington is heaving with photographic monuments, buildings, and locations – these are just some of my favorites. Feel free to share your own in the comments below! 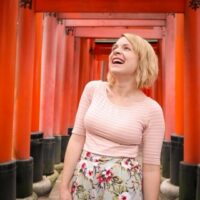 Ashlea is an excitable Australian with a passion for photography, sustainability, and travel. She is the creator of A Globe Well Travelled - a blog for those who want to be more adventurous while exploring the world. You can connect with her on Instagram and Facebook.