What is a Stabilizer for DSLR Video?

With DSLR cameras becoming increasingly powerful, equipped with higher resolution sensors and incredibly powerful image processors, it is but natural that filmmakers, both indie and professional are resorting to shooting with these relatively smaller cameras rather than the big and bulky professional cine cameras.

Wielding a large camera on one’s shoulders and doing quick maneuvers is physically daunting if not likely to cause injury. They also induce camera shake. The big advantage of DSLR cameras is that they are lightweight. Notwithstanding, when the camera operator is moving around, visual jerks are unavoidable.

To avoid visible bumps, and more importantly to ensure that your footages are super-smooth, hand-held or body-worn stabilizer for DSLR video are used.

The iKan EC1 Beholder 3-Axis handheld gimbal stabilizer is a good choice in that sense.

The advanced 360 ˚ motorized gimbal is truly ingenious. Minor touches or brushes will not affect it as the gimbal returns the camera back to its original position. However, if point and hold the camera in any direction for a couple of seconds, the gimbal will lock the camera in that position automatically.

A set of three powerful 18650 model rechargeable Li-Ion batteries power this stabilizer for DSLR video. A full charge is rated to last for a full day of shooting.

The base quick release plate of the iKan EC1 Beholder has a set of two knobs. These one turn knobs hold the camera in place as per your preferred X and Y axis location.

Check on Amazon, the iKan EC1 Beholder 3-Axis stabilizer for DSLR video is a powerful tool for the discerning video shooter. Handheld stabilizers are nothing new and we have seen plenty of models in the recent past. Some are a real pain to set-up and properly balance before getting started.

The iKan EC1 is an excellent tool, one that is bound to make video shooting on the go a breeze. It is easy to set-up and balance, and the gimbal is super smooth to work with. 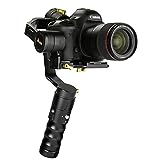 Ikan Beholder 3-Axis Gimbal Stabilizer with Encoders for DSLR and Mirrorless Cameras,...
CHECK PRICE Product from Amazon. Updated on 2020-01-26. We may get a commission.

There is another very good alternative available to the EC1 Beholder, the 3-Axis Gimbal Zhiyun Tech Crane. See the comparisons in ratings and price below.

Ikan Beholder 3-Axis Gimbal Stabilizer with...
CHECK PRICE Product from Amazon. Updated on 2020-01-26. We may get a commission.

Zhiyun Crane V2 3-Axis Bluetooth Handheld Gimbal...
CHECK PRICE Product from Amazon. Updated on 2020-01-26. We may get a commission.

10 Tips for Filming with Stabilizers

10 Newborn Photography Props to Add Creative Flair to Your Photography

The Best Tripods Under $200 You Can Buy Right Now: A Guide to 2020’s Best Budget Tripods