As much as we try to get it right in-camera, sometimes unwanted objects get in the way that we can’t help. Even worse is when we aren’t anywhere near a computer! What is a photographer to do? Use an object removal app on their phone, of course!

Many photographers stumble upon the common problem of wanting to remove a distracting element from an image.

Luckily, programmers heard their cries for help and developed applications that instantly and seamlessly vanish distracting objects. Whether you’re working directly from a smartphone or your professional camera is synced with your Android/iPhone device, you’ll appreciate our list of the five best object remover apps!

I tested out the following two images in all the applications. They’re intended to match common objects photographers want to remove from their photographs.

The first image features a couple of Alaskan Klee Kai puppies playing – but there’s a tennis ball in the way, which greatly ruins the composition.

The second image is a Water Spaniel with a leash, an issue that pet photographers encounter very frequently. By removing the leash, we can keep the focus on the dog.

Adobe Photoshop Express
Industry standard software is at it again

World-famous company Adobe redesigned many of the beloved Photoshop tools for mobile devices, including the ability to remove objects.

Adobe Photoshop Express is available for:

Android
Pros
Features three beloved Photoshop tools: Spot Heal, Clone Stamp, and Patch Tool
Tools are fully customizable
A complete editing program with many other tools and adjustments
Cons
The software is free, but does have some paid-only features
Can be glitchy when doing long strokes of the Spot Heal tool

Is anyone surprised that an Adobe program ended up on the list? The industry leader in imaging programs and applications, Adobe has a long history of helping photographers get rid of whatever they desire in their shots.

What was once exclusive to the pay-only computer program has now been retrofitted for mobile devices at the steep price point of $0! Yes, Adobe Photoshop Express is free and comes with many of the beloved tools that imaging makers have valued over the years. Three of these are the Spot Heal, Patch, and Clone Stamp tools.

Depending on the complexity of your edit, you can use one of the above tools to remove an unwanted object. All of the tools are quite customizable, allowing you to adjust not only the size of the brush but also the hardness or softness of the brush’s edges.

Here is how it fared with our two images:

For the puppies with the tennis ball, we used the Spot Heal tool and it worked quite well. You can tell that it took the photograph information surrounding the ball and tried to randomize the selection in order to more realistically remove the ball.

For the leash, there were a few minor discrepancies, primarily in the tree shadow to the viewer’s left of the dog. However, this may have been due to the leash being removed in one long stroke rather than in small sections, which might have been the better way to tackle that scenario. This being said, you can always use the Clone Stamp or Spot Heal tool to fix up that tree shadow!

Despite the leash not being a perfect removal, the slew of editing tools available in this application make it a worthwhile download.

Snapseed does so much more than just removing unwanted objects; a complete all-in-one program.

Snapseed is available for:

Android
Pros
Completely free
Lots of fantastic image editing tools
Good AI for object removal
Cons
Not very intuitive to use. The object removal tool is under a misleading name and changing the brush size took a bit to figure out.

Snapseed is a popular editing app for smartphone photographers and those who enjoy selfies. It has a slew of tools to make your photographs really pop! With so many editing options, the ability to remove objects is often overlooked in this nifty, free program. Despite it being completely free, this app really does shine and its efforts at removing objects are consistently accurate.

You remove objects using the Healing tool (which has an icon that looks like a band-aid). As someone who comes from a photo editing background, I don’t personally associate stamping out an object I don’t want with a tool called “Healing,” but that’s easy to get past.

All you do with this tool is draw over the item you want to get rid of and the app does the rest! What struck me at first was that it felt like you couldn’t adjust the brush size; fortunately, it turns out you can. All you have to do is zoom in on the image and the brush becomes larger. Once more, if you can get past this oddity, the tool itself is fabulous.

For our puppy shot, the tennis ball was replaced in a way that can arguably be considered more realistic than the Photoshop Express edit above.

The leash removal also went fabulously, with no traces of its existence left behind!

TouchRemove
One touch and it’s gone

As easy as tapping what you dislike, TouchRemove will get rid of it quick and easy.

You don’t need to be a technical genius to use an app named “TouchRemove.” The name already indicates how it is meant to be used. With a visually pleasing and easy-to-use interface, this app is easy to load up when you need to remove something from an otherwise great smartphone composition.

It’s also a pretty light program; it didn’t bog my phone down at all. There wasn’t even a lag when uploading the two test photographs, and they were pretty large files!

With three tools to choose from, the menu is very simple. On our red puppies, the Remove tool made quick work of that ball! For quick object removal situations like this, Photo Retouch excels.

However, when it came to leash removal, TouchRemove struggled a bit. I believe this is because the tool is a bit difficult to use. There was an accuracy issue, which can be a problem when you’re trying to remove something that requires real precision. To be frank, though, unless you frequently need to remove something more complex, it might still be worthwhile to have an easy-to-open program on your phone (because being bogged down by lag sucks!).

YouCam Perfect
A perfect editor for your photos

The name says it all! This app aims to bring perfection to your (slightly) imperfect images.

YouCam Perfect is available for:

YouCam Perfect is designed as a simple, automated, all-in-one editing program for photos taken with a smartphone camera. You will find plenty of editing options in an easy-to-use interface, including the object removal tool.

Much like the other apps on our list, using the tool is rather simple. Just mark the object you want to get rid of, and YouCam Perfect will do the rest! The program is swift in its approach, and I was pleasantly surprised by the results.

Starting with the puppy image: The app did a solid job of replicating the texture of the grass. In fact, the result was so realistic that it became difficult to remember where the ball was originally positioned!

The leash removal looked pretty accurate, too. I was especially impressed by how the tool handled the tree and the dog’s fur that touched the leash – it left their structure intact!

The only downside is that, although the app itself is free, the removal tool is a paid feature.

Remove Unwanted Object works wonders on the most complicated photographs.

Remove Unwanted Object is available for:

In my opinion, this is the most satisfying program on the list. Remove Unwanted Object may not be the most comprehensive or advanced app, but its accuracy is outstanding! This program is straightforward and to the point, so even the most technologically inept individuals should have no problems using it.

The app is very responsive and made it easy to select the parts of the image I wanted to remove. For the red puppies, the Lasso tool was used to outline the ball.

After I hit “Process,” a very satisfying fade animation played while the tennis ball was removed. The result did have some stamping issues, but nothing additional editing couldn’t fix.

However, the app’s ability to remove the ball wasn’t what impressed me (frankly, the other programs did this part better on the first go).

Instead, it was the leash removal.

Where the majority of the apps struggled with the leash, Remove Unwanted Object blew them all out of the water. The app was able to completely clone out that leash and leave an image in which you would never guess a leash existed. It worked so flawlessly around the tree shadows that there are no discrepancies anywhere in this render! Quite a feat.

So which app should you download? I’d encourage you to try them all! Each phone is different, and the best application is the one that works flawlessly with your Android device. These five best object removal apps are all top-notch in their category and excellent choices in their own right.

That being said, our general favorite was Remove Unwanted Object. Although it had stamping issues with the tennis ball shot, it did such a great job with the leash removal that it’s a must-have for complicated photographs. Another great pick is Snapseed, which did a solid job of removing objects and offers plenty of other handy tools. If you need an all-purpose image editor, Snapseed is the way to go. 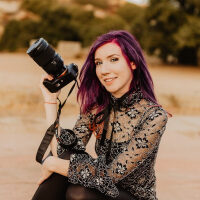 Anabel DFlux is a published photographer in the sunny states of California & Nevada, known for a vast array of photographic work. You can connect with her on Instagram, Facebook, and LinkedIn.