There are many different techniques you can use in photography. Photography allows us to use our imagination and creativity. Whilst some images are meant to be professional (wedding shots, product promotions), we can also have fun with photography and create images that are unusual and eye-catching. A particular technique that is extremely effective and fun is forced perspective images. This article looks at how to create forced perspective photography together with a handful of awesome examples.

What Are Forced Perspective Images?

Forced perspective images use optical illusions and trickery to make objects appear in a different manner than what they actually are. This technique is used regularly in the film industry, architectural design, and photography. Forced perspective manipulates our own perceptions and challenges what we see with how our brain can process it. In effect, it is the intentional creation of a certain perspective to make our brains think in a certain manner.

For example, an object could be positioned in such a way that it appears much larger or smaller than it actually is. The object obviously is exactly the size that it should be, but the way that it has been framed creates a perspective that is unusual and thus confuses our minds. Forced perspective photography is some of the most creative and imaginative of its kind. For those who have a creative streak and enjoy producing abstract pieces of art, forced perspective photography really is a great tool.

What Are the Basic Techniques Involved in This Type of Image?

Architecture is often one of the main focal points of forced perspective photography. Architecture by its own emission uses perspective to create interesting angles and shapes.

We can manipulate the intended design of a building to our own ends to create a forced perspective. Never-ending corridors, low-angle building shots, and making use of symmetrical lines are all examples of forced perspective in architecture.

A classic example of human-forced perspective is when a person sits upside-down against a wall to make it appear that the wall/floor are at different angles.

When we view an object, we have a fixed idea in our brain of what size it should be. We can use this psychological pre-determination for our benefit to create forced perspective images. We can position objects in such a way using perspective, that they appear much larger or smaller than they should be.

For example, we could take a photo of a toy dinosaur from a low angle again a backdrop of skyscrapers to make it appear that the dinosaur is enormous. This particular technique is often used in conjunction with relative distance between objects which can add to this effect.

Now that you understand a little more about the different types of forced perspective images, we have provided some working examples. Actually seeing a myriad of examples will better help you understand how this photography works. We claim no ownership over these images and we commend the photographers who had the imagination to create them – enjoy!

This is possibly one of the most common types of forced perspective – the typical angled shot of a skyscraper or tall building to make it appear imposing and even taller. The key to this type of photo is to get as low down as possible and the base of the building and shoot in portrait.

Architecture can be used in so many different ways to create epic forced perspective images. The lines, patterns, angles, and shadows can all be used creatively. In this shot, the photographer was actually positioned on a hill in Paris and tilted the camera to make this row of buildings appear as if they were sinking.

Aside from architecture, roads can also be used in some superb ways to create unusual and striking perspectives. This is possibly one of the most common road variants but it is effective. Simply get low down with your camera on the surface and take a shot towards the horizon. This creates the illusion that the road stretches forever.

Corridors, alleys, side-streets, and any structure with columns can create spectacular forced perspective photos. Repetitive columns and archways can create a focal point. Furthermore, they can give the impression of a never-ending path as seen in the image above. The shadows and the archways lead your eye towards the far end of the walkway.

The interiors of buildings can be just as impressive as the exterior. Shopping malls, hotel foyers, and other large open areas often lend themselves to forced perspective photos. If we look at this example, it is actually hard to tell if we are looking up at the ceiling, or through a corridor. The different levels of the hotel complex together with the symmetrical lines and lighting really combine together to create an interesting effect.

Humans can play a huge role in creating interesting forced perspective photos. The way that we interact with objects, set ourselves in certain positions, and combine with architecture really can make some wonderful perspective shots.

When people are inserted into forced perspective shots, they can give a sense of scale too. The photo above demonstrates this perfectly – is the couple sat upside down leaning on the floor or is it clever camera trickery?

Smartphones have changed the way that we take and look at photos. Smartphones are also great tools to use in photos. Whilst you can take photos with your smartphone, you can also use your smartphone as a prop.

One of the most common smartphone forced perspective shots is the one seen above. This may be a typical clichéd photo but it does create a fantastic effect. In this photo we see a beautiful wooded area that is out of focus – the smartphone camera is focused on the same wooded area but the framing is in focus – the two combine together to create one single perspective of the woods. Simple but effective!

Another classic is the traditional “photo that looks like I am holding an object”. Possibly the most famous examples of this forced perspective photo are someone holding the Eiffel tower, or someone holding up the Leaning Tower of Pisa.

These photos might be cheesy as hell, and you can find thousands online, but they are still extremely fun and creative. For those who can think outside the box, holding or interacting with an object photo can be truly amazing. The above photo, for example, shows a silhouette of a man holding the sun during a beautiful sunset.

Water and reflections are two more important tools that can be used in forced perspective photos. Reflections in objects such as mirrors or reflective surfaces can create symmetry. Furthermore, mirrored images can give you endless possibilities to skew the perspective or create epic shots.

Water, of course, is reflective too and we can use water to our advantage in photography. Puddles, lakes, rivers, rain – all of these can create fantastic forced perspective images. In the photo above, we see the reflection of two skyscrapers in a puddle on the sidewalk – the effect is simple but eye-catching and emphasized by the plane in the right corner.

Another example of using water reflections to create forced perspective can be seen here. The man is simply aiming his camera at the pavement and has been captured in this action. What makes this photo so brilliant is the perfect mirror image in the water on the pavement. Everything is aligned perfectly – from the man himself and the pavement to the surrounding skyscrapers.

As mentioned above, humans within photos can be used to create some bizarre and confounding effects. We can take basic human actions such as sitting down, standing, or walking and use them to create mind-boggling forced perspective photos. In this photo, we see a man sitting on the ground, or is he sitting on the wall or a step? Where is he sitting? The perspective of this photo has been brilliantly skewed and the end result is entertaining.

This is another fine example of forced perspective using humans. As you can see, you can be truly creative and the effect here is fantastic. If you actually dissect this photo it’s really simple – the man is literally lying on the road with his legs crossed, propped against the lamppost. If you rotated this photo 90 degrees clockwise it would just look strange. What makes this photo is the fact that it has been rotated – the buildings in the background look as if they are clinging onto the road, and that the road is, in fact, a vertical wall!

Shadows and aerial angles can both be used in photography to create unusual perspectives. Taking a photo with a drone for example or getting up into a high position can present you with a whole new angle and allow you to snap objects and scenes in a different light. This shot, for example, uses both shadow and aerial perspective to create something interesting. The shadows are cast perfectly on the road which gives the impression that you are looking at them from a straight-on angle, instead of the actual top-down angle.

Who doesn’t love a good huge object/tiny person photograph? This is often the cornerstone of forced perspective photography and it is easy to see why – these photos are just fun and interesting. We know full well that this guy doesn’t, in fact, own a backpack that is twice his size, but the way the photograph has been framed challenges our brain. The backpack has been placed in the foreground, and the man is standing maybe 10 meters behind – this creates a forced perspective, and makes the backpack appear bigger than it is.

Watch out, there are a huge index finger and hand about to crush you, tiny man! This is what reaction this photo inspires and the effect is dazzling. This photo again uses relative size and field of depth to make the hand appear ginormous. What makes this photo, however, is the fact that the “tiny man” has his arms stretched out perfectly – it looks as if he is attempting to grab the huger index finger!

How awesome is this photo? The creativity used here is simply brilliant. This photo has several different elements that combine together to create a cool end product. First, we have the drink in the foreground which due to its positioning looks huge.

Do we have a new Superman here who is holding up the entire globe with just one hand? In this image, the man is actually doing a cartwheel and the shot has been timed perfectly. Furthermore, an extreme wide angle or fish-eye lens has been used to emphasize the curvature of the earth.

These are just a few superb examples of forced perspective photography – there are many more to be found on the web so have a look! It is truly amazing to look at what people have created and how they have used perspective to produce some utterly memorable shots.

Why not pick up your camera and start exploring the possibilities that forced perspective photography brings today?

You will be amazed at the fun you can have, and the end products you can create! You should now have an understanding of how to create forced perspective photography so give it a go today! 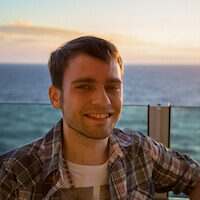 The Best Way to Store Digital Photos: The Ultimate Guide

How to Brighten a Part of Your Image in Photoshop

How to Store Cameras and Lenses at Home (Top 10 Tips)

How to Convert RAW to JPEG on Mac, Windows, and More

How to Take Real Estate Photos with Your iPhone: 10 Easy Tips

How to Turn Photos into Paintings: 5 Options for Creating Painted Masterpieces!