When it comes to photo editing, you’re going to want a high-performing PC to do the job. Editing software takes a pretty big toll on your computer’s memory and overall performance when in use.

If you don’t have high enough specs, you’ll find your PC handling the program in a rather sluggish manner. With all this in mind, there are certain factors need to consider when choosing the best PCs for photo editing.

Key Things to Consider When Choosing the Best PCs for Photo Editing:

As a photographer, having access to your files and also having enough storage space to install and run your programs is key. You’ll ideally want a PC with 1TB or more in storage.

The best PCs have ample RAM, this allows you to handle performance-heavy programs with ease. Look for a PC with 8GB of RAM at a minimum.

Processors and graphics cards vary from PC to PC, you ideally want high-performers on both ends. The latest Intel i5 or above is a great choice, paired with a powerful NVIDIA or Radeon graphics card.

Price is the final factor and one that comes down to your personal budget. If you have a tight budget, expect to make cuts in some of the above departments to find a PC in your price range.

We have divided our research and writing in two parts.

The first part covers (gaming) PCs which due to their processing power are ideal for photo editing. You will have to buy a monitor for photo editing separately. Also, you may want to buy a non-gaming keyboard.

As an Amazon Associate we earn from qualifying purchases.

The second part covers so called All-in-One PCs which are ideal for those also want to have a powerful PC or Mac build into the monitor.

As an Amazon Associate we earn from qualifying purchases.

The CyberPowerPC's Game Master Desktop Computer is the first of many Gaming PCs on our list. It’s powered by an 8-core processor, which is perfect for handling high demand tasks. It comes with a NVIDIA GeForce RTX 2060 graphics card, giving you stunning visual performance. In terms of RAM, you get 16GB, more than enough for running most programs.

And if you’re worried about storage, fear not, this PC comes with 240GB SSD and another 2TB of storage on a built-in hard drive!

Okay, so we’ll admit this is quite a power-heavy PC and you might be wondering why. But trust us, you’ll be thankful for it when it comes to using some super-high-performance programs. Where you’d normally expect a lag, you’ll find none. And if you want to dip into video editing, you’ll still find that this PC offers more than enough. 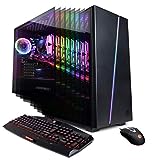 The difference in price is just a few dollars and the base clock speed is 3.2 GHz as compared to the K’s 3.7 GHz. So, in terms of RAW processing power there wouldn’t be too much of a difference. You save some extra cash and some extra heat as the K generates more heat during max load.

Justification: Do I need the MSI Trident X Plus?

We say again, for Lightroom you don’t need the K. The basic 3.2 GHz Intel Core i7-8700 Six-Core processor is more than enough for your requirements. You would also be able to run Photoshop with some degree of satisfaction depending on your preferred tools of editing. The only reason you would want to fork more money for something like a Core i9 or an AMD Ryzen 9 SoC would be because of future diversification into video editing or generating time-lapse and or hyper-lapse sequences. These are resource hogging applications are the best places where you can expect that your virtual cores capable of running extra threads to come in handy.

About the stock cooler

The other specs of the PC are 16 GB of DDR4 memory, 256 GB NVMe SSD plus a 2 TB normal HDD storage, and a MSI GeForce RTX 2080 VENTUS 8G GPU.  This would have been higher on our list of the best pc for photo editing, but for the stock cooler. Nevertheless, this is a good option if you choose a better cooler for more resource hogging applications. 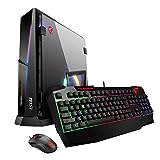 And going with the same argument with which we concluded the previous paragraph we recommend the Dell Alienware Aurora R8. Another 3.2 GHz Intel Core i7 8th Gen SoC with 6 physical cores.

The basic thumb-rule in high end PCs is that more the cores you have the better that PC is at multi-tasking. And believe you me when I say this, gaming PCs are the best when it comes to editing photos as well as videos. That is why we have includes the Dell Alienware Aurora R8 as one of the best PCs for photo editing.

Armed with a 3.2 GHz Intel Core i7-8700 six core chip and with the power to multi-thread and therefore handle 12 threads at a time. One of the major advantages of investing in a proper gaming PC is the cooling mechanism. The Aurora R8 comes with an optional liquid cooling system. That basically means this monster is designed to handle demanding games, or in our case work with even the most demanding tools in Photoshop.

The other specs of the R8 are – 16 GB DDR4, NVIDIA GeForce RTX 2070 graphics with 8 GB GDDR6 memory. There are twin storage options inside. One is the fast 256 GB PCIe NVMe M.2 SSD and the other is a 1 TB 7200 rpm hard drive. The best thing about the Aurora R8 is that the tower gives you tool less access. So scalability is easy and is a definite advantage. One of the best pc for photo editing if you are on the Windows platform. 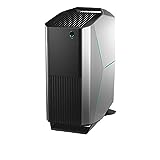 If the configurations do not make sense the name should be a giveaway. The Obelisk is powered by a Core i7-9700K 8 core processor. The chip does not support multi-threading so only 8 threads are supported. The base clock speed of the chip is 3.6 GHz. But it can be tweaked to 4.9 GHz using Intel’s Turbo Boost 2.0 technology.

The MSI Trident is a VR ready computer. It is powered by a 3.0 GHz Intel Core i7 9th Gen Eight-Core processor which is paired with a NVIDIA GeForce GTX 1660 Ti (6GB GDDR6). The CPU does not support hyper threading. Also there is no bundled cooler with the CPU which means you will need to purchase that separately.

The internal memory of the PC is 16 GB DDR4. VRAM is 6 GB GDDR6. Internal storage is 512 GB NVMe PCIe SSD. Definitely one of the best pc for photo editing if you are on a budget. 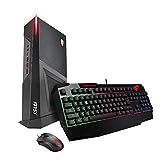 You can’t leave an iMac out of any discussion to do with photo or video editing. Or for that matter anything to do with visual content creation. Because an iMac has one of the best calibrated displays in the market straight out of the box. It’s a visual content creator’s absolute delight. The problem is a 2019 edition iMac costs in excess of $5K. Yes, at that price you do get the entire setup and not just the tower, but the amount is significant.

Thus, we decided to pick some budget options which are 2017 releases. Slightly cheaper but equally useful regardless.

This all in one unit is a mid-2017 edition. But don’t take it lightly. Under the hood the 27” iMac is a powerful tool in the right hands. Powering the iMac is powered by a 3.4 GHz Intel Core i5 Quad-Core processor. The processor can be overclocked to a maximum of 3.8 GHz.

8 GB of DDR4 RAM makes up for the built-in storage. The iMac gets a 1 TB Fusion Drive as its main storage. Graphics is supported by the AMD Radeon Pro 570 Graphics card with an integrated 4GB of memory.

While we absolutely adore a large bright and high resolution display, the same may not be within the budget of most photographers. Especially when you consider upgrading to the Mac platform. Thus many photographers would have to remain contended with a slightly smaller screen. Something like a 21.5” display.

Powering the iMac 21.5” is a 7th Gen Kaby Lake 2.3 GHz Intel Core i5 Dual-Core processor. The processor can be overclocked to a maximum of 3.6 GHz. The 21.5” is practical and should be enough for editing images in full scale. The only thing is it does not offer 4K resolution. It offers full HD resolution only.

Internal memory is 16 GB DDR4. Graphics is powered by an Intel Iris Plus Graphics 640 chipset. This particular configuration comes with a 256 GB SSD storage.

The Microsoft Surface Studio 2 is an All-in-One desktop unit designed keeping in mind the visual content creator. Photographers and video editors. With a stand design that lets you push the display all the way to your work desk to work like a flat piece of paper for maximum editing convenience.

The power of the Surface Studio 2 comes from a 2.9 GHz Intel Core i7 – 7820HQ processor paired with 16 GB of DDR4 RAM. Graphics is powered by NVIDIA GeForce GTX 1060 GPU with 6 GB GDDR5 VRAM. Storage is entirely solid state drive. This particular iteration of the Surface Studio 2 comes with 1 TB SSD unit. Overall this is our preferred choice as the best pc for photo editing in the A-i-O segment.

A large 28” display that also supports touch. Multi-touch to be precise. There is nothing that gives more pleasure. Because when you are using the Surface Pen to edit your images, you can also pinch to zoom in and out and do much more than that using the fingers of your other hand. 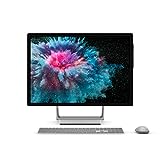 There are multiple iterations / versions of the HP Pavilion 27-inch A-I-O unit. This particular version is powered by an Intel Core i7-8700T 6-Core CPU. The base clock speed of the CPU is 2.4 GHz but the same can be overclocked up to a maximum of 4 GHz. 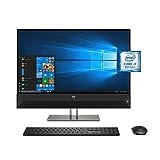 Yes, it does. There are some tools in Photoshop which won’t even work without a GPU that is unsupported. Thus, if you are working with 3D, or doing Smooth Brush resizing and your GPU isn’t supported the tools won’t work at all. In addition, when working with Camera RAW, or using one of the blur gallery tools you would definitely find a fast GPU helping you get a much smoother working experience than when using a slower or outdated GPU.

AMD Ryzen vs Intel Core: Which One Should I Choose?

AMD Ryzen powered PCs have come along in leaps and bounds and today’s Ryzen 9 powered systems are ahead of their Intel Core i9 processors in terms of RAW power. With 12 cores and multi-threading possible on them allows the Ryzen 9 to handle 24 processes as compared to only 16 that are capable on the 8-core Core i9 processors from Intel.

The Best Laptop for Photo Editing in 2020: The Ultimate Guide (10 Premium & 5 Budget Laptops)

Best Tablets for Photo Editing in 2020

The Best Computer For Video Editing – We Compared The Top Options

Yoga A940 vs Surface Studio – Battle for the Best AIO