Low light photography is a specialized genre. It is gear dependent. Not every camera is suitable for low light work. Since there is a lack of light to work with you need a special camera. One that can produce good exposure even in those difficult situations.

The Sony Alpha a7S II continues to amaze us with its sheer low light performance. This is a true low light champion and arguably the best camera for this genre. One of the main features that determine the low light performance of a camera is the size of the pixels. The larger the individual pixels, the more light it can capture.

A Word on Pixel Size and Pixel Density

Thus, the size of the sensor, too, affects this measurement. If the sensor size is small, such as when you compare a crop sensor camera with a full-frame sensor.

This is where the Sony a7S II does have phenomenal performance. The full-frame sensor real estate is filled with 12.4 effective megapixels. That means the individual pixel size is much larger than other full frame high-resolution sensors. As a matter of fact, it is something around 8.40 µm (microns).

In other words, higher pixel density is never a requirement for low light photography.

The a7S II has a maximum ISO sensitivity of 409600. The original a7S was also a good low light camera. But the new system has been optimized. Plus, the low light algorithm has been updated too. This ensures that the camera handles low light much better.

This mirrorless system comes with a 24-megapixel sensor. The same as the previous version. But this is a BSI sensor. The individual pixel size is 6.00 µm. Thus, even though the size of the pixels is not the same as on the a7S II it still does its job.

A Word on BSI Sensor Architecture

The a7 III has a BSI CMOS sensor design. BSI sensors architecture is different from what normal imaging sensors in terms of design. In normal sensors, the light-sensitive photodiodes and the accompanying wiring are all on the same surface.

On BSI sensors the light capturing photodiodes are on the upper surface. The lower surface contains the wiring. This increases the chances of light to be captured by up to 90%. Therefore improving the overall efficiency and mainly the low light performance. 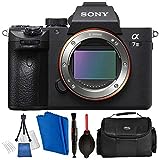 Sony Alpha a7 III Full Frame Mirrorless Digital Camera (Body Only) ILCE7M3/B - Bundle...
CHECK TODAY'S PRICE Product from Amazon. Updated on 2020-11-24. We may get a commission.

The Sony Alpha a9 is the third entrant in this discussion of the best low light mirrorless camera. It has been rated very highly by DxOMark in their low light performance rating.

As a matter of fact, it sits right between the two mirrorless systems that we have discussed above. It pits the a7S II but narrowly misses out to the a7 III in terms of low light sports rating.

The Sony Alpha a9 is powered by a 24.2 megapixel full-frame backlit stacked CMOS sensor. It also comes with a global shutter mechanism. The last of which is not entirely about low light photography.

We have already seen plenty of backlit full-frame sensor architectures. But what Sony has done with the A9 is that they have rearranged the memory slots to push them further back. This opens up a lot more space for light to get captured. In addition to that, the stacked design actually incorporates a memory layer.

Sony says that the new design architecture leads to a multitude of other benefits like higher resolution and faster readout. That in turns produces a much higher frame rate and a larger amount of detail.

Sony a9 Full Frame Mirrorless Interchangeable-Lens Camera (Body Only) (ILCE9/B),Black
CHECK TODAY'S PRICE Product from Amazon. Updated on 2020-11-24. We may get a commission.

The next is a surprising entry. The Nikon Z6 is the smaller sibling to the Nikon Z7. 24.5 megapixel as against 45.7 megapixel makes a huge difference. But for the sake of this discussion, we shall only limit ourselves to the low light prowess of the two.

That huge difference in resolution translates into larger pixels. The Z6 with its smaller resolution is able to capture more light per pixel than the Z7. As a matter of fact, the Z6 has one ISO advantage over the Z7. While the maximum ISO of the Z7 is 25600 (Native), that on the Z6 is 51200, significantly higher.

Plus the Z6 uses a dual-gain technology. This second higher-gain circuit will suppress noise at ISO levels above 800. This will reduce grain but in the process, some amount of detail will also be lost.

Nikon Z6 Full Frame Mirrorless Camera Body
CHECK TODAY'S PRICE Product from Amazon. Updated on 2020-11-25. We may get a commission.